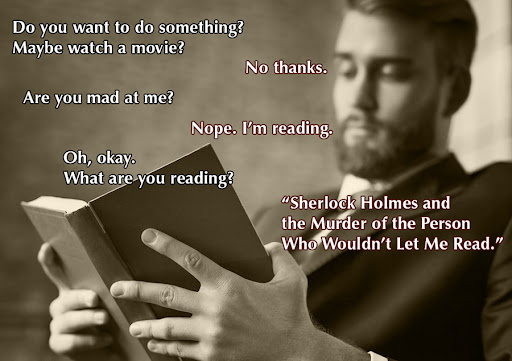 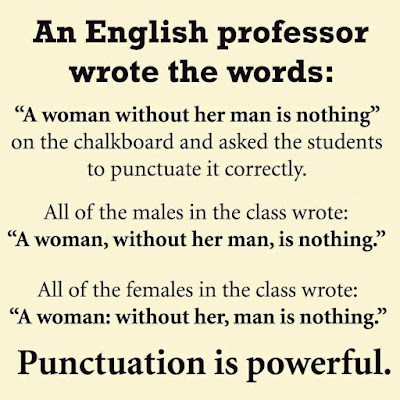 The Themis Trilogy by Sylvain Neuvel - a review 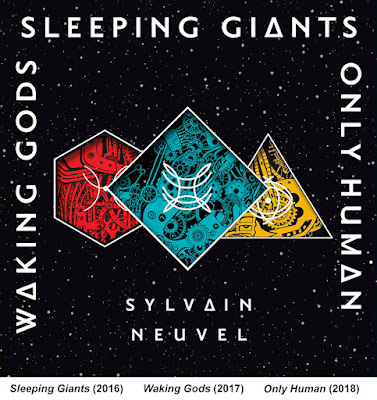 (I’ll try to watch myself, but reading any review is a potential spoiler gauntlet.  You’ve been warned.)

Giant alien robot left behind by aliens visiting in the depths of human history?  How could I not give this book a second look?!?

I had never heard of Sylvain Nuevel before this month, but I’m a fan now.  Regrettably, the reason I’ve likely never been aware of him is that his bibliography is not extensive. Double-regrettably, this means there is not a lot of work to dig into after The Themis Files.  And I surely want to read more of his writing!

Sleeping Giants crackles and pops with lively energy as the heroes fumble and stumble with the mystery of the giant metal hand.  The impossible hand from thousands of years ago only becomes more puzzling with the realization the hand is but one part of a titanic statue. Then things start to gallop at the revelation it is in fact a robot, not a statue.

The characters are all engaging and distinct. Following them through scientific puzzle-solving alongside international tensions and clandestine power politics makes Sleeping Giants my favourite of the trilogy.

(Of course, the first book of any trilogy is generally the most fun because everything is new and shiny)

Waking Gods focuses on the challenges and tragedies when the makers of the robot appear on Earth.  Very gripping stuff.  Usually the second book of a trilogy is the soggy, saggy instalment, but not so here!

Only Human is not “bad” in any way, but the examination of the robot-making aliens and their culture really plods in comparison to the first books.  An alien culture with thousands of years of recorded history and dazzling advancements in technology should be way more…interesting.  I guess the clue is in the title, and Mr. Neuvel is perhaps trying to show that aliens with such qualifications are still “only human”.  Sheer momentum and engagement with the characters kept me turning the pages, but without the quite the same wonderment of the first two books.  Neuvel also spends a few too many words describing and detailing why certain characters are angry with each other. This is followed by too many words spent on the characters re-re-re-explaining their actions in an attempt to gain forgiveness.

Neuvel’s choice to write the entire trilogy in dialogue format took some getting used to. 89% of the books are transcripts of interviews between characters (though, by Only Human, I’m not sure just who is transcribing these interviews for what record) The remaining 11% is journal entries and “live, on the scene” reporting.

On the one hand (giant or otherwise), this stylistic choice worked okay.  As I say, the writing sparkled and raced along.  On the other hand, this lack of sensory descriptions and environmental cues kept pushing me away from full immersion.  Neuvel manages to pull off this “radio play script” approach, but I occasionally felt dissatisfied, like I was eating a premium quality hot dog, but without any mustard or condiments.

Another small discontent is the killing of characters. Neuvel does not remove them gratuitously and their demise delivers a solid dramatic punch to the gut.  HOWEVER, for my tastes, when an author removes a main protagonist from the plot, he should be damn sure the remaining characters have the breadth, depth, and delight to fill the void.  When my reading enthusiasm for Only Human lost a bit of steam, I’m sure part of the blame goes to the "second banana" characters not being able to pull the narrative weight.

In summation: are they worth reading? Very much so!  Despite my caveats above, in less than a week, I gobbled up the entire trilogy with keen hunger.

It's no secret among friends, family, and especially the two writing groups to which I belong that I have a...cantankerous...relationship with poetry.  Classic old-timey poetry with metre and rhyming can stir and intrigue me. It's the "modern" poetry that bounces off my cognition like the proverbial raisins off an Oldsmobile*. 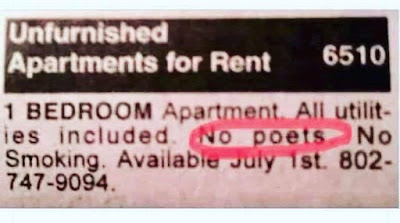 *11 bonus points to the first person to identify the source of that classic simile
Posted by Big Murr at 7/19/2022 No comments:

And this method is certainly useable beyond such a specialized genre as "dystopian teen lit"! 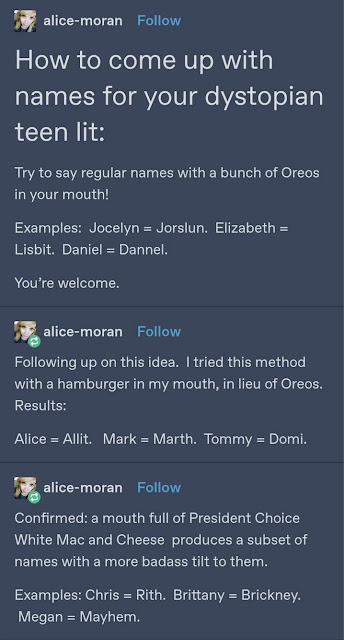 FINALLY, a "must read" list that is true and good 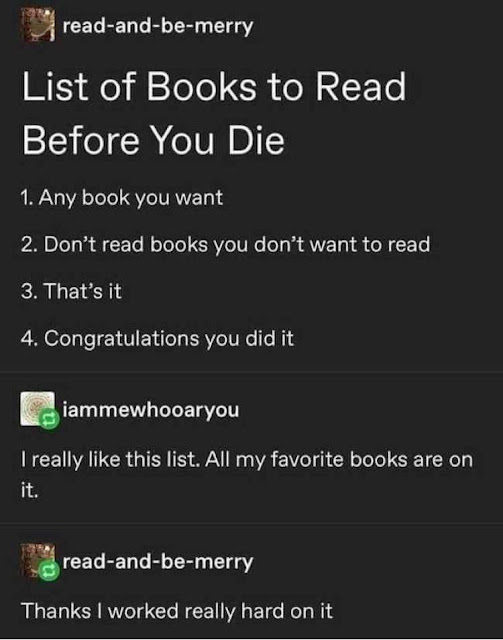 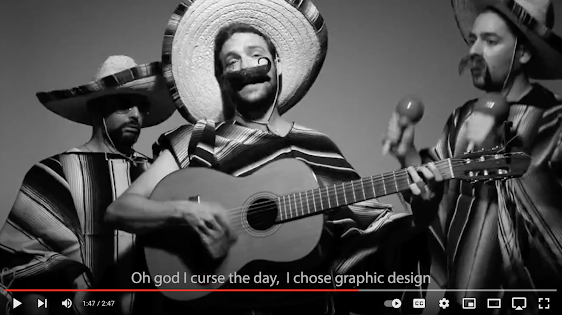 A brilliant ditty about the woes of being a graphic designer/commercial artist.
https://youtu.be/GDlHvB5hz7c
I confess I never heard the term "screenager" before today,
but boy-howdy do I ever know the melancholy woe in the song!
Posted by Big Murr at 12/31/2021 No comments: