Tears (or laughter, I assume?) 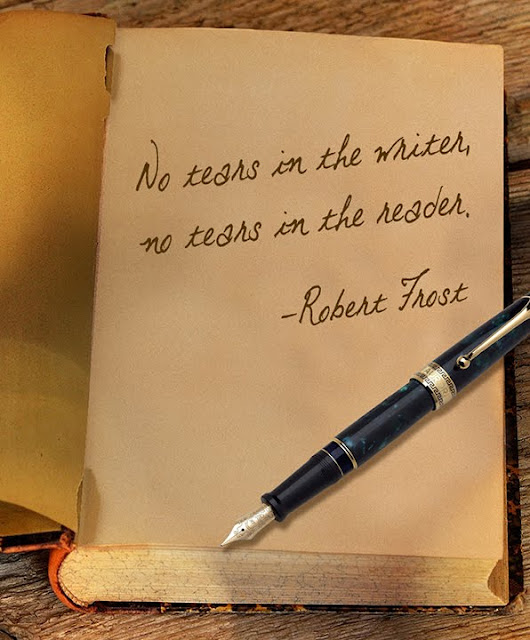 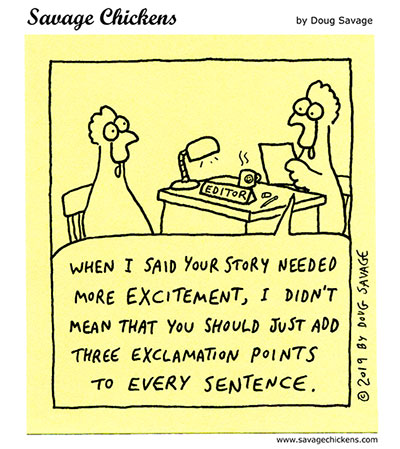 An all too-common malady, sadly...

Today I came across a quote penned by Beatrix Potter at the height of her writing career.

'If it were not impertinent to lecture one's publisher, you are a great deal too much afraid of the public for whom I have never cared one tuppeny-button. I am sure that it is this attitude of mind which has enabled me to keep up the series. Most people, after one success, are so cringingly afraid of doing less well that they rub all the edge off their subsequent work.'

If some magical means granted me one wish (while on this topic), I'd be hard torn to decide:  Either travel back in time to give Ms. Potter a most fulsome handshake (and hug, if such be not too brazen) OR wish that every "author" farting out book after book in a never-changing series have this wisdom written (in Sharpie!) on their forearm.

Recent events have exposed me to abstract paintings.  Online discussion and a wee visit to our new world class Remai Art Centre.

My opinions of abstract art aside for a moment, I've been reminded how insanely huge these paintings are.  And the memories start to churn...

Even with Art College 40 years in the rearview mirror, I still get a twitch in my left eye on this topic.  Our painting professor's personal work definitely ran to abstract works.  With this apparently in mind, he mandated that the minimum size of any painting we created was 4 feet x 4 feet. 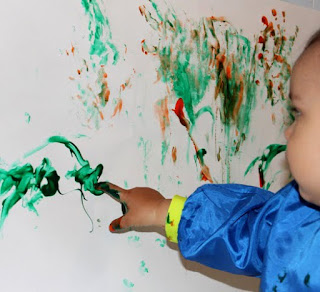 This worked fine for abstract painters.  The majority of my classmates were only in the Art College department because their Mommy & Daddy insisted with an iron hand they attend college.  These kids jumped into art very much as the lesser of evils.  Any creative passion was faint, if extant at all.  To them, dropping paint balloons from a stepladder on to a canvas to make "art" was easy fun.  8' x 4' sizes granted these glorified play school doodles faux gravitas.

Meanwhile, the handful of us who had a yearning towards more representational painting were a beleaguered minority, struggling to fill 16 square feet or more with recognizable details.  It made for LONG, exhausting hours.  We essentially taught ourselves while the professor and his abstract disciples flung paint at each other.

One of my time travel fantasies is to go back to that college and coach my novice young self to have firm, diplomatic conversations with the professor, insisting on equal time and consideration for my artistic vision/needs.

All Our Wrong Todays - review

All Our Wrong Todays 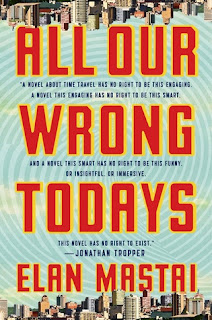 The premise grabbed me immediately.  In 1965, a scientist unveils a gizmo that provides unlimited, free, clean power.  And in a reasonable portable form, if desired.  As a result, the sci-fi visions of the 21st century hoped for came true.  Exploring the solar system, towering sleek buildings, flying cars, and more and etc.

In 2015, our hero is a 30-something aimless quasi-loser of a guy.  His father is a genius intent on inventing time travel. (This is all on the back cover blurb, so I'm not spoiling anything, per se).  The nub of things is that our hero travels in time, mucks things up and creates the world you and I see outside our window right now.  Our hero considers this essentially a primitive dystopia and wants to correct things.

And the story continues.  And drags.  And slogs.  And generally is like carrying a mattress up a flight of stairs.  Each landing is a chance to catch your breath and regain your resolve.  In less metaphorical terms, something actually interesting happens in the story to regenerate enthusiasm.  Then it’s back to slogging.

What drove me cuckoo for cocoa puffs was the inane repetition.  A clip from the book by way of one example:

"–you should be punished for what you did.  You're not allowed to be happy.  Everything you touch will turn to ash.  You must be held accountable.  Everyone you love will be swarmed by darkness."

Okay!  I get it!  There’s repetition for emphasis, but this is repetition ad nauseam for the sole reason, I strongly suspect, to pad out the page count. These "lists" are ubiquitous in the book.  It gave me the unpleasant dream feeling of "three steps forward, two steps back".  Running in place without getting anywhere.

Beyond the thesaurus regurgitating for emotional states, the hero explains the mechanism/method of his father's time machine at least three complete times.

When the book stops and a chapter is supplies us with “summary of the book so far”, I began to wonder if the novel had been serialized with instalments in its early days.  That might excuse some of the repetition, but certainly not excuse the sloppy editing that didn’t clean things up when making a standalone book.  But then a second Summary chapter happens, only this time with a simpering coy wink from the hero-journal writer that he was doing this summary stuff on purpose.

Yeah, it’s all about padding the page count.  There are too many soft-headed readers out there in modern times who think the only value in a book is measured in literal bulk.

The base idea and the bones of the book are fascinating.  Too bad the flesh covering those bones is flabby and feeble.

Spring is in sight! The bovalo are getting frisky. The ice is cracking on the river.

Abigail Maye "Blackie" Brewster can't believe her luck—schlepping around in the summer heat as the assistant of a high-maintenance movie producer.  When did her life become a mix of flat and irritating?  What's a world-wandering nomad from Saskatchewan to do?

Abagael Mae "Magpie” Brewster can't believe her luck—spending the summer sailing the skies in a prototype steam blimp, flying a circuit of the Western Domains, engaging in a little light espionage.  What more could a University of Saskatchewan Academician desire?

Blackie's life veers in a direction that threatens to snap her mind.  Magpie's light-hearted spying takes a hard and dangerous direction that threatens to snap her spirit.  When the paths of these identical twins born of different mothers intersect and tangle together, their lives become a race across a rolling prairie landscape both familiar and strange.

Home on the Strange is a rootin'-tootin' daredevil tale of far-fetched fiction in a west that does not share our history.

Learn more about the book!

Buy an ePub copy at any of these fine online stores! 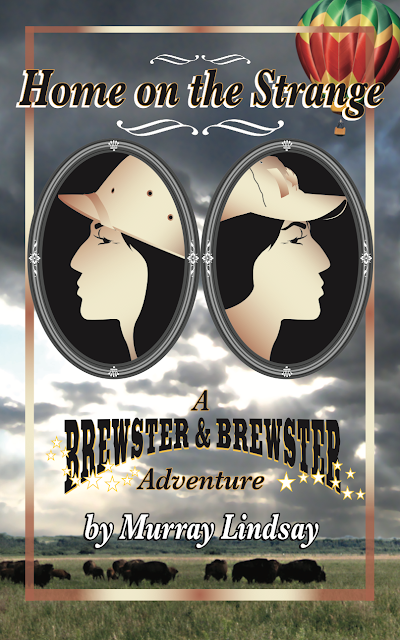