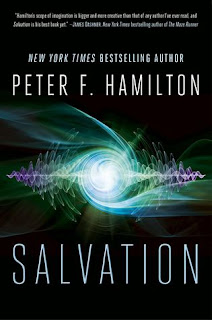 This is making me so darkly melancholy. I am a major fan of Peter Hamilton and I almost did a shout of glee when my turn in library queue came up.

And I'm giving up on it. I'm about one-third of the way into the book and it's like reading some novice's first book rather than one of a seasoned and excellent professional.

The first prologue pages featuring aliens sending infiltrators in a major long game gripped me by the throat. But immediately following is an info dump so thick and clumsy, I could practically hear the reversing beep of the truck as it emptied the pages of character bios all over me. Okay...I tried to keep track of all these dossiers and settled in and...the story jumps to some ridiculous future school without any apparent relevance. Pages of an incomprehensible game between monkeys and kids flounders by. As soon as we're free of that, we go flying back in time to the info-dump characters' past. That sequence actually re-engaged my interest until it ended, flipping us back to the "present day" and the info-dump characters not doing anything but petty sniping and arguing.

Dulling the entire work is a heavy patina of "been there, done that". No dazzling new SF concepts are trotted out, but only the ones Mr. Hamilton has used (and perhaps over-used) regularly in recent years.  His love of wormhole instant travel has hit the point that these characters are using them to save a few steps from bedroom to water closet.  Okay, I'm engaging in hyperbole, but not by much.

As I write this, memories of his Void trilogy bubble up to the surface.  I'd forgotten my impatience with that effort, though I did finish the trilogy.  Every time the plot shifted to the "fantasy novel" of the dreamscape city, I nearly cried with boredom until we returned to human space.  It felt like he'd concocted two or three novels, and rather than simply writing two or three novels, felt obligated (by publisher or reputation?) to shuffle them together to make a giant trilogy thing.

The way Salvation was reading, I suspect he's warming up the same strategy.

I'd just shrug and say "They can't all be magical", but this thing is a trilogy, and judging from Hamilton's past output, that means it'll be the better part of five years before he moves on to a new effort.

Scenes that hit the button... 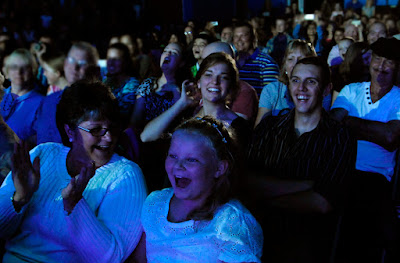 I saw this pop quiz on a couple of other blogs recently and decided it might be a fun offering for my little part of the web.

What movie moment/scene popped you right in the button?  Whatever emotion that was evoked, be it laughter, awe, tears, fascination, etc and etc.

To get the ball bouncing, here are some movie moments that did it for me:

Dirty Harry (1971) The monologue discussing the .357 and how many bullets remained..."Well, do you punk?"
Star Wars (my original viewing in 1977) - seeing the Millennium Falcon jump to hyperspace. After umpteen SF books describing "jump to hyperspace" there it was on the big screen.
Arsenic and Old Lace (1944) When Mortimer Brewster (Grant) and Johnathan Brewster (Massey) both madly leap to keep the lid on the window seat closed, securing the dark secret of the contents within. The dawning comprehension and deduction on Grant's face is priceless.
Superman: the Movie (1978) Superman's first appearance. "Don't worry, miss, I've got you." "You've got me? Who's got you?!?" And then the subsequent string of super deeds keeps me smiling.

I'd suggest keeping your offering to three or four moments. Otherwise, you'll discover an hour or three of your day evaporated in memory, research and list-making.

Write what you know

There are editors and publishers who take that precept as literal writing law.  They have a needle-point rendition hanging on their wall, and gesture to it when discussing manuscripts with authors.

They are, of course, far too literal and narrow of vision.

People who cling to the literal rule would apparently wheel a wood-chipper into a bookstore and, beginning with the science fiction and fantasy section, work their way thru all the genres of westerns, mysteries, horror and so on, heaving every book into the hopper until nothing but retellings of “Death of a Salesman” remained.  Oh, so treasured would be the books written by former skydiving firefighter spies who could turn a decent phrase.  All the other books would come from people like us, with generally mundane work resumes.  Yawn.

The loophole lies in the word “know”.  Literalists take it to mean “what you’ve smelled with your own nose, seen with your own eyes, what you’ve cried over, what you’ve laughed at”.  Since we do have all those examples of fiction on the shelves, a larger number of people understand “know” also means “what you’ve learned thru intense research”.  As the story goes sailing off to Barsoom or Middle Earth, the research is buoyed up on a surging sea of imagination.  (Or, the dinghy of imagination must be buoyed up on the sparkling lake of research.  That might be more accurate.)  Studying, reading, interviews and collating all that new information is now what “you know”.

Perhaps that is the new definition of “mainstream fiction” - the easier it is to research and interview for facts to fill in the gaps in the author’s personal knowledge, the more “mainstream”.  The genre ripples outwards, probably requiring the author to leave their social circle of contacts to find police detectives, ranchers or combat veterans to interview, or to find credible books written by same.  Further yet, now finding books and people who know the profession as it was a generation or two generations ago.  And further back into history means the interviews are now with historians, and then archaeologists and palaeontologists.  Now it’s bits and pieces that must stitched together by extrapolation and imagination.  Astrophysicists and astronomers and chemists provide facts and their own imaginations and speculations alongside your own.  Finally, you’re in the heady genre realm of “making it plausible to the reader”, because nobody knows for sure.

That “plausibility” is still the slender link back to “write what you know”.  Too many lazy authors think “It’s a scene where a dragon is talking to a little manlike creature about a magic ring”…why do I have to care a sniff about “research”??  Only if you want to write a compelling story of any merit.

How far afield have you gone in your writings?  When did personal experiences need to be supplemented by a goodly portion of research?