Hitler vs Dracula by P.S. Duncan 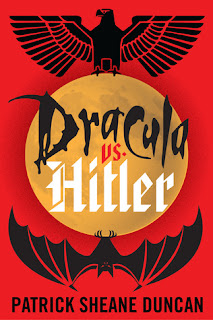 A lurid title to catch the eye.  A well-written interior to hold the imagination.  Yet, I can only give it a passing, middling grade.  “3 stars out of 5”

The good starts with Duncan’s basic writing skills.  He knows his craft on a nuts & bolts level.  The aspect that most appealed to me were the descriptions.  Characters had facial features, the landscape had colour, the world was vibrant.  After so many modern books written by lazy and/or untalented hacks who abstain from description*, this book was like eating a fully-loaded pizza after a plate of stale baloney sandwiches (without mustard).

Duncan’s characterizations are also good, if a bit of a stereotype.  Then again, he is fully channeling “Dracula” by Stoker, so the characters may be more “homages” than “stereotypes”.  I’m willing to grant him a pass on this.

The action scenes are well-told and vivid.  (There’s that description stuff again!)

Okay, I know for a fact it didn’t need to be 500 pages.  This is where the list of unfortunate elements starts.  I think a 100 pages could be excised without too many tears or sweat.  In particular, there is a strange section in the front half that feels very much like a late addition insertion.  It strikes me as if Duncan’s beta-readers felt the book too short for a modern market lusting after overweight books, so he created this narrative to wedge in between events.

The story revolves around the town of Brasov and its environs.  We meet upstanding heroes, dark villains and intriguing oddball characters.  History is established in the area, reaching back five decades and much more.  But this “insertion” sees our heroes skip off around Rumania on a tour of destruction.  The derring-do reads well enough until the merry band returns to Brasov.  There is then an abrupt change in tone.  Despite living and fighting together for months, the characters act and react in their relationship to one another as if those months never happened.  By way of analogy, I felt like I was driving on a road (the main plot) and innocently followed a detour sign.  After a winding, rambling route over hill & dale, I returned to the main road to discover I was only a block and a half distant from where I obeyed that first exit sign.

Obviously, this is nothing but my theory, but I’d lay money my “postscript insertion” theory is correct.

THE biggest problem is that the book is supposed to be Dracula versus Hitler.  Vampires in WW II.  And that promise comes up woefully short.  I’d estimate this book is nigh on 75% WW II adventure with at most 25% supernatural antics.  As a vampire, Duncan’s Dracula is quite…mundane.  Oh, he has power, but there is only a smattering of occult atmosphere around him.  For far too many scenes, Dracula is just “one of the commandos”.  He could as easily be a shipwrecked alien with extrahuman power as a vampire (which I would have preferred, in hindsight.  More honest and less disappointment from preconceptions betrayed)

Stepping away from the vampire angle, there are also a few tasty suggestions that functioning magic and spellcraft exist.  However, that is all we get; suggestions.  Nothing but a few, brief, fleeting moments that add almost nothing to the plot.  Nothing but a pointless tease.

In summation, a competently written WW II adventure-thriller.  There is raw excitement and several cliff-hanger moments for anyone that enjoys commando capers.  If you were also (like me) expecting the mythology of Dracula and supernatural powers locking fangs with the Nazis, you will be left quite hungry.

Oh, one more observation.  All thru the work, I could not help but compare Duncan’s depiction of Dracula with the masterpiece novels of Fred Saberhagen.  Duncan comes up a bit short of Saberhagen’s artistry, but he makes a good effort.