Dauntless by Jack Campbell.  2006
leading into the Lost Fleet series.

I did enjoy this first book, in a scarf-up-junk-food, wiping-orange-powder-off my fingers sort of way.  The premise is a nifty twist on the "Sleeper Wakes"/"Buck Rogers" idea of a hero from the past coming to whip the flaccid future folk into shape.  It's a stretch, and a bit of a cliche, but I accepted it without qualm.  Absorbing the situation, the characters, the forces in contention kept me engrossed as the story crackled along. 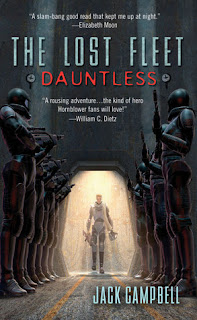 I finished book #1 here and then discovered another seven to go in the "Lost Fleet" series.  This did not please me.  One bag of junk food is a treat.  Consuming a total of eight made me queasy just contemplating the idea.

The basic plot is full of jumps and twists and derring-do.  Conceiving challenges for his hero and then creating a clever solution is Campbell's strong suit.  So, kudos there.

His weaknesses, though, become repetitive and tiresome.  For openers, there are no descriptions.  I literally have no idea what any of the characters look like, nor is any sense of environment provided.  There's not even such ultra-bland indicators as "She was a beautiful woman" or "He was handsome."  Nothing.  Stick figures engaged in a minimalist "Etch-a-Sketch" world.  (When one character was described as wearing a star sapphire ring, such a spark of focussed colour nearly blew me out of my chair)

The puzzle-cracking and problem-beating kept me going into book after book.  I was just invested enough in the hero and the predicament to want to see it resolved.  It's also a rude marketing decision to have each book stop almost literally in mid-sentence.  Not so bad now, coming in well after the entire series is published, where I can just pick the next one and keep going.  If I had read this back in 2006, forget it.  I wouldn't have bothered with ever looking for the next one to appear.

I did stop at the end of book #6.  Officially there are eight in the series, but all the plot points I had been following actually wrapped up at the end of #6.  More problems were looming for Our Hero, but I jumped off the train at this station.  Done and glad to be done.

I've ramped up my criticism a bit high here.  I think because I'm frustrated with the waste of potential. Mr. Campbell has the skills to craft a decent book, but I suspect (based on the tonne of books published) he has chosen the regrettable path of speed over quality.  He could aspire to being a noteworthy chef, but instead has chosen to be a fast-food burger flipper.

I've read worse books/series, but I still am unable to recommend this effort. 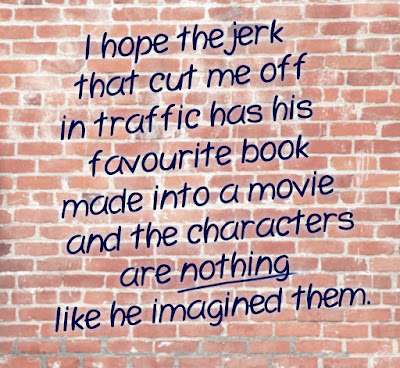