(I can't promise the following will be spoiler-free)

I cannot deny the work is skillfully written and takes hold of some big SF concepts.

For me the grand SF concepts became buried under an overlong examination of mundane human affairs.  There is no question that any SF story needs some rounded, real characters interacting with each other, but there has to be a balance.  I’m reading this genre for the spicy bits.  I found the final dish to have too many beans and not enough chilli.

And the bowl was too big.  That’s the nub of my complaint.  Spin needed to be 450 pages the way I need five spoons to eat.  350 pages would have made for a much more engrossing experience.

For the last 15 years, give or take, books have suffered bloat.  Forget about the obesity plague sweeping the citizens of the world, put novels on a diet!  Unlike many authors, Wilson’s writing talent is sharp enough that there is no obvious slabs of fat to easily slice away.  The pruning would have to be “surgical” and carefully done, but it definitely needs doing. 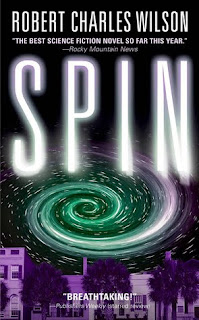 The span of the book covers some thirty-five years, all done thru the, frankly, dreary viewpoint of Tyler Dupree.  When an unknown intelligence encases the entire Earth in a barrier bubble, there is a strong case to be made we need to stay grounded with the viewpoint of a pretty standard human.  In my opinion, this is one case where following the formula of major disaster books and movies might have been the way to go.  Multiple points-of-view from various walks of life around the world.  But that’s getting into the zone of an entirely new recipe-dish.  Let’s stick with this meal.

The other gimmick that burns my biscuits is time skipping.  I hate it.  I hate the gimmick the way TV overuses it and I didn’t enjoy it in Spin.  Right away, we’re thrust (as we later learn) near the end of the saga.  First, we’re left log-rolling in a confused effort trying to understand who’s what and what’s where, but we’re game to try.  We piece together that Tyler and Diane are fugitives in Asia, attempting something very risky with drugs.  At this time, we have no idea who these people might be, but they’re staunch allies and friends, at the very least.

And by word count, the flash backs are not flash backs, but the main event.  We spend more time in the linear days starting from the first appearance of the spin effect barrier while tripping over these chapters in the future every now and then.

This choice turns many themes and moments of tension into flaccid yawns.  The story generates a speculation whether Tyler will ever reunite with his childhood crush Diane in any meaningful way?  Well, yes, yes they do.  So, all the pages we have to read about Tyler pining at some level for Diane is a waste of our time.  The author has told us they get together.  A sharp scene occurs with Tyler driving cross country with Diane dying in the back of the car.  Will he make it?!  Will she?  Well, yes, he will and she will because the author has already told us.  Yawn.

In some stories where this time bounce stuff happens, there will be some sleight of hand trickery.  It turns out the flash forward Tyler and Diane are robot duplicates or aliens that have stolen the humans’ identities or something.  But, not in Spin.

Well, I wanted to enjoy this book.  It came highly recommended.  The super science concepts really charged my imagination.  But, I guess some people just love a lot beans overwhelming the meat and spice.

I'm not a big fan of multiple viewpoints - it makes the plot feel kind of like a sponge. What has this guy written ... Darwinia? A cool idea, and it could have been really good, but it was just kind of there. Like his typewriter has a cruise control and he put a brick on the button. How could that have been nominated for a Hugo? Are people not writing any more? It had enough of an idea for a two page short story. Maybe three. I think SF has fallen from being surround your cool idea with a plot and action, to let your tepid theme lie and gasp like a fish looking for water. I can only think of three good writers currently working.