I've now read two R.C. Wilson books (and some short stories).  His prose and writing skill is exemplary.  I won't challenge that for a second.  However, his work is not for me.

In "Julian Comstock", he has captured the stylistic tone of Mark Twain and other such period writing.  Love that!  However, he does nothing with this skill.  This book (and the much-lauded "Spin") just meanders along for 600 pages to culminate in a whole lot of nothing.  Around the 400 page mark, I realized that I had just finished the world's longest prologue. 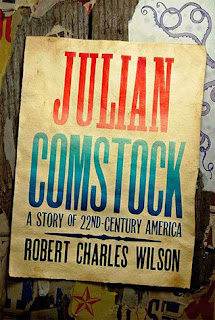 Perhaps to a relative novice reader of SF, especially post-apocalyptic rebuilt civilization SF, this book would be exciting.  To anyone who has read more than three of that style of novel, "Julian Comstock" comes across as a pretty bland bowl of "been there, done that".  In point of fact, it barely ranks as a post-apocalyptic piece.  Only by dropping little crumbs to remind us it is the 22nd Century keeps the book from being some historical narrative of the Boer War or other 19th century era politics.

I can only theorize that Wilson receives the praise he does from "jazz lovers".  Jazz is all about virtuoso musicians plinking, tooting and strumming with great skill but building nothing.  Some people are enraptured by this.  Others, like myself, would rather these virtuosos use this great talent to make a heart-stopping, stomach-clenching and especially mind-boggling "Beginning, Middle and End" piece.  "Julian Comstock" leaves your anatomy undisturbed.  It drifts along, amiably diverting, mildly amusing, occasionally unsettling, until it finally bumps to a quiet stop.

I think I had about five chair naps while reading it.

So, with regrets, I have to bid Robert Charles Wilson "au revoir".

PS What nearly made me toss the book unfinished were the repetitive descriptions of a 22nd American "movie" performance.  Once gave us an insight into the culture/world.  After that, it was nothing but adding pages to the 600 page bloat.